More than 12,000 gather for the 26th edition of the Reclink Community Cup

More than 12,000 footy-hungry faithfuls shook the dust off their footy scarves and gathered at Victoria Park, Abbotsford on Sunday 19 June for the first Reclink Community Cup since 2019, in what was a glorious day of community spirit, mediocre footy and outstanding live music -  which featured a punk-rock band teaming up with an Australian icon - all in the name of charity.

After a tight neck-and-neck battle all game, the outcome of the match eventually came down to the closing minutes of the fourth quarter, with the Triple R 102.7FM & PBS 106.7FM Megahertz holding their championship trophy for another year after defeating the Young & Jackson Rockdogs by just two points, 48 to 46.

On the live music front, proud Noongar artist Bumpy honoured Archie Roach AM with her enthralling rendition of Roach's seminal song and the official 2022 Reclink theme, ‘Let Love Rule’; Parnsip won over the early crowds with their sterling indie-pop-rock goodness; Izy delivered a world-class neo-soul set; global collective Ausecuma Beats initiated an on-field party with their infectious rhythms; Cash Savage and the Last Drinks reaffirmed why they are irrefutably one of the country’s best live musical acts, and pub-rock outfit Private Function closed their non-stop live set with a guest appearance by Ross Wilson, who delivered a full-throttle, punk-rock rendition of his 50-year-old classic, ‘Eagle Rock’.

According to CEO of Reclink Australia Dave Wells, The Reclink Community Cup isn't just a fun day out, it's an event essential to raising much-needed funds for disadvantaged Australians.

"The Community Cup is only a snapshot of the incredible work Reclink do every day in and for our communities, running community sport and recreation programs for people who are marginalised and disconnected," he said.

"We work with people who are suffering the impacts of trauma and domestic violence, people who have drug and alcohol addiction, who are homeless, or long term jobless, people with a disability and who are disconnected or abandoned, young people who are in trouble with the justice system.

"The Reclink Community Cup is vital for our souls, our hearts, our health and our minds. After long periods of isolation, it is so good for us to be connecting with people and with our community again."

Elsewhere, RRR Station Manager Dave Houchin applauded Melbourne's music community and all the players, staff and volunteers who turned it up to 11 to make the event a raging success.

"The real winner on the day was community culture. We're really proud of the special people who took to the field for both the Megahertz and the Rockdogs, and the inclusive, generous and caring spirit with which everyone played the game.

"A huge thank you to the bands, everyone who volunteered their time on the day (and in the months leading up to the event), and to everyone who came down. Melbourne community culture is rebuilding right now, and hopefully the Community Cup did a little bit to relay the foundations while raising funds for Reclink."

For those unable to attend the Melbourne event, Channel 31 will air the Cup on Saturday 9 July from 2-5pm, then again the following evening from 11.30pm.

The Reclink Community Cup will continue its Australian circuit over the approaching weeks, with events to be held in Brisbane, Sydney, Hobart, Canberra and Fremantle. Remaining dates are below. 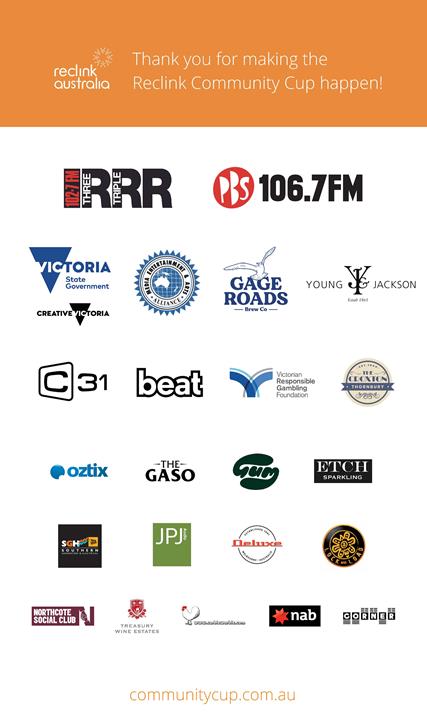